After a week of cloud coverage, the borough of Palmerton, Pennsylvania was met with its first burst of sunshine. Less than a mile away and across the Lehigh River, the colorful hues of the Lehigh Gap Nature Center flag betrayed its backdrop of dull greens and browns that, at this time of year, described both the land and the water. The flag whipped wildly to occasionally reveal the word “Open”, and an array of bikers, hikers, and dogs made their way along the cinder path next to the river or the ascent up the mountainside. While the terrain seemed to offer no respite or nourishment for land creatures, golden eagles soaring hundreds of feet above gave clues that life was nearby; or perhaps they were intrigued by the pockets of nearly exclusively egg-white graffiti that decorated the concrete vestiges of a railroad bridge.

A 15 minute hike northeast on this terrain will suddenly yield to reveal hundreds of acres of prairie grass. It might not be obvious, but those grasses are in intense combat with over 80 years of pollution, and subsequently nearly 40 years of the most successful conservation efforts in the nation — at the beginning of the 21st century, the scene above would sound like a pipe dream. Just a few weeks later, when spring was in full bloom, it would look like a fantasy.

From this side of the river, which inhabits the EPA Superfund site known as the Palmerton Zinc Pile, very little of the 121-year-old Palmerton itself is visible. The steeple of the St. Vladimir Greek Catholic Church and the United States flag next to the town’s “Welcome” sign are the most distinct structures above the treeline. Looming heavily over the town itself is the dusty and conspicuously red Marshall’s Hill, whose mansion at its summit is older than the buildings below. The story of this entire area describes a loyalty to a factory now defunct, the deep pockets of the one of the world’s largest mass media conglomerates, and the dedication of just a handful of individuals.

Only for a brief flash in human history has the Lehigh Water Gap known any other condition than one of verdant greens and lush vegetation. For several thousand years, animals and Native Americans alike have used this area to hunt and migrate, and that is how it remained well through the arrival of Europeans in the 18th century. In 1898, the New Jersey Zinc Company relocated its primary factories to a section of the Lehigh Gap, and to accommodate its large workforce, built the borough of Palmerton which was officially established in 1912. From this year until about 1980, through even the Great Depression and both World Wars, the Zinc Company kept equitable employment to support the families in its town. Due to new environmental regulations and a decline in the value of zinc, the company shut down. What stayed behind was the borough of Palmerton, filled with a population still incredibly loyal to the company and what it did for their ancestors and families.

“Without the Zinc Company, there would be no Palmerton,” Lynn Shupp said over the phone. A lifelong resident of Palmerton, and whose father worked for the Company, Shupp has owned a photography studio in the town for nearly 23 years. She had just finished a photoshoot with a very well behaved 1-year-old.

For most of the Company’s existence, the environmental movement was either very small or totally non-existent. During the toughest times of the 20th century, such as the during the Depression, Shupp noted that families would cut down trees for warmth. “You have to weigh the positives and negatives,” and in the case of Palmerton and the zinc smelting industry that helped it thrive at its best times and survive at its worst, “with every positive came a negative.” The negatives were the culmination of years of pollution that manifested as contaminated groundwater and runoff into the Lehigh River, as well as the bulbous, drab moonscape of the Kittatinny Ridge and Blue Mountain just nearby. This mountain and the surrounding landscape became the Palmerton Zinc Pile Superfund Site.

A ‘Superfund’ is an area designated and protected by the US Environmental Protection Agency to cleanup contaminated environmental sites, particularly those that are a threat to human health and safety. The EPA also designates where possible a “potentially responsible party”, or PRP (a group or entity that owns or is/was responsible for the environmental damage) to fund or manage the cleanup. The Superfund site at Palmerton and along the Lehigh River here makes up about 3000 acres of land, most of which is owned privately. In this bizarre and small-town success story of Palmerton Zinc and the Gap Nature Center, the eighth largest entertainment company in the world has a major role to play.

In the 1960s, Gulf and Western Industries purchased the New Jersey Zinc Company as part of its conglomeration and expansion into several industries. The smelting operations ended in 1980, and another company, Horsehead Industries, picked the company up and now recycles zinc from industrial waste, rather than smelts it. “Because smelting (not zinc recycling) caused the pollution,”  Chad Schwartz, Director of Science and Education at the Lehigh Gap Nature Center said, “American Zinc Recycling is not held liable for the contamination of the site — Gulf and Western technically is,” though they did revegetate approximately 800 acres in the 1990s. Viacom acquired Gulf and Western in 1994, and 11 years later, CBS acquired them when Viacom and CBS split. As such, CBS Corporation, the network host of “The Big Bang Theory” that has never smelted a single slab of zinc, must fund the cleanup of 3000 acres around the former smelting plants. Schwartz noted that CBS has generally gone “above and beyond” the necessary amount of funding and engagement with the Superfund cleanup process.

The simplest solution was to remove the first 12 inches of topsoil on the Ridge, as well as find somewhere else to put the several million tons of highly-contaminated cinder, known as the “Cinder Bank,” that runs along the base of Blue Mountain and the Aquashicola Creek, a tributary of the Lehigh River. These projects alone would have costed approximately $4 billion, with a high likelihood of taking both more time and money than planned. As such, a different approach was needed. In 2003, dozens of small sites were set up to test the validity of using native prairie grasses, and shortly after a quarter-inch of soil and seed was spread on the lower parts of the Kittatinny Ridge. Those areas had returned to life within a year, and the residents of Palmerton once again saw green across the river. That green did far more than make the mountain pleasing to the eye — it allowed native wildlife to once again to return to its grasslands habitat; the deep roots helped to stabilize the top and subsoils, simultaneously trapping the heavy metals and contaminated soils underground and preventing runoff to the river and circulation into the food chain. This has implications not just for Palmerton, where a primary objective of the Superfund restoration was to cleanup over 2,000 properties, but for the extent of the Lehigh River and beyond.

“What happens up here,” Christopher Strohler said as he roughly circled Carbon County on a map during a presentation to the Environmental Journalism class at Muhlenberg College, “affects what happens down here.” He drew attention to Allentown and Bethlehem, cities 40 miles south, where the Lehigh River flows then into the Delaware River and beyond. Senior Conservation Planner for the Wildlands Conservancy, an education and conservation activism group that deals across much of eastern Pennsylvania, Strohler noted that water quality is a major factor in determining what areas are key to protect and take action with. As such, changes can take years to develop and become apparent. “It’s hard to see direct benefits, there’s lots of work for little reward. It’s a leap of faith. It’s not for yourself but for future generations.” By contrast, the success of the Palmerton Superfund Site saw the grasses, trees, wildlife and human visitors flourish within a matter of a few years. The Nature Center hopes to continue this tradition as it has hosted several thousand students over the years to draw attention to the local environment and the importance of giving it attention. Lynn Shupp credits this and any way possible with making the community an environmentally conscious one. Having hosted several of her photos at the Center for a “Nature in Photography” exhibit last spring, she found her passion for photography to be that she can let friends, family, and viewers appreciate things that would otherwise be taken for granted. She believes that letting young people “see things differently,” recalling a photo she took of an inch worm hanging off of a flower, will spur the future to be a green one both literally and metaphorically. The story of conservation is one that has the ability to run both local — in the way that Shupp’s neighbors and friends would make the 90 minute drive to Harrisburg to see her work in the state capitol building — and global.

Clifford Zeller hosts a YouTube channel known as “The Wandering Woodsman”. With over 1.6 million views across 500 videos, he has given his devout following of subscribers first-hand looks into some popular trails, several abandoned mines, tunnels, and houses, and has uncovered numerous fossils out in the eastern Pennsylvania wilderness, all in the last few months. “The industrial past brought prosperity to the area and much needed work, but in our desire to grow and prosper we often fail to understand what the impact of our actions will have on our future — specifically environmental issues.” Nature became a place for Zeller to think, heal, and pray. His YouTube channel is “a way of sharing my love and enjoyment of the outdoors with others and to show people what’s out there . . . The outdoors is a place of healing, refreshment, adventure and discovery.” 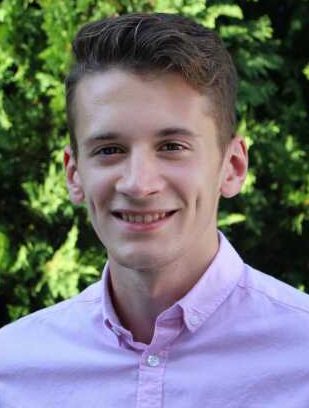 Corey Mullins is a graduate from Muhlenberg College with bachelor’s degrees in Media & Communication and English. As a passionate and successful collegiate runner (and avid hiker if he wakes up early enough) he has come to appreciate the necessity of clean air and a cleaner environment for physical and mental health. He has a deep interest in how films, images, and words can deeply affect individuals and communities. When not hunched over video editing software, he enjoys playing adventure and board games and making sure his cat Gus is not eating something he shouldn’t be.