Can We Press Rewind?

Picture this, a moonscape of land. Not even an invertebrate in sight. The ground is so toxic it is reduced to dry dirt that kicks up into the air, blown by the wind atop Blue Mountain. Abandoned by the mice that once hid in its bushes, the songbirds that rose with the sun and twittered away, signaling the start of the day to night dwellers like the fox and raccoon– and the end to their prowl. What was previously host to all kinds of wildlife, now uninhabitable. Any reminders that there was once life here is little more than bare sticks shooting up from the earth and perhaps a few dried up roots.

This desolate scene was set by the New Jersey Zinc Company, a zinc smelting facility that dumped waste onto the land, into the river, and tossed it into the sky, causing the heavy metal zinc, along with cadmium and lead, to permeate throughout the land, causing all forms of life to flee.  What is now the Palmerton Superfund Site is a hot topic around the Lehigh Valley. Once categorized as the largest and most contaminated Superfund site east of the Mississippi, remediation efforts put forth by the EPA, the Lehigh Gap Nature Center (LGNC), the current owner of the New Jersey Zinc Company, and others have turned the once denuded landscape into a wildlife preserve. But is it possible to return nature to its pristine condition once the damage has been done?

The mountainscape has been subject to a handful of remediation tactics intended to restore the land and wildlife in the area. These methods have included the tillage of land (mixing the topsoil with earth further beneath it) so that the heavy metals are forces deeper into the ground. The soil is mixed with limestone and other organic compounds that work to neutralize the acidity and precipitate heavy and harmful metals. Tillage was employed at the beginning of the remediation process and has since given way to other methods such as prescribed burns and passive wetland systems, which each target different issues with the persistent contamination in the area. Prescribed burns entail the systematic, controlled burning of designated pieces of land for any one of a number of reasons including the remediation of a Superfund site. Passive wetland systems are on the opposite side of the spectrum where they require little to no control and are, as the name implies, passive. This system, like the tilling method, requires limestone and other sulfate-reducing bacteria to work. Using these, there are buffers set up so the leaching of chemicals and heavy metals does not reach the waterways. The latter systems are currently being used to continue the process of remediation for the Palmerton Superfund Site.

Burning the habitat for the animals that have returned to the area including mice, voles, chipmunks, raccoons, bears, and eagles, just to name a few, in order to remediate the area seems counterintuitive. However, sometimes it is necessary to take progress a step or two backward to make way for a stronger and healthier future. “We only burn ten acres of the grassland at once– at most twenty acres per year– in order to maintain habitat across most of the site,” explains Chad Schwartz, the Director of Science and Education at the LGNC. Keeping the burns controlled to only a portion of the land allows for the animals to continue to live there while also allowing the plant life to grow back with more vigor and less zinc. “Prescribed burns are ultimately beneficial to wildlife since they eliminate tree species that can transfer toxic heavy metals from the soil into the food chain,” Schwartz adds. These methods are all in an effort to bring back the wildlife into an uncontaminated habitat where they will be able to thrive.

Wildlife spotted on a recent trip to LGNC included birds and butterflies.

A comprehensive ecological assessment in 2010 informs that the efforts have paid off. The LGNC has reported a flourish of biodiversity and the return of a number of species to the area including squirrels, bears, foxes, and hawks. “Most of the restoration work had already been completed by the time I become involved with the LGNC,” Schwartz says, “however, within my lifetime I have witnessed the ecological transformation of the Superfund site.”

Contrary to the reports of the increase in wildlife, a trip I took to the LGNC and a hike up to the once barren wasteland of a mountain showed slight growth and little wildlife. Allowing for the fact that the visit took place in late April, perhaps the bare trees and the overcast sky had something to do with the general feeling of desolation that surrounded the site. I can only imagine what it looked like before all this remediation work began. The Superfund site “is now home to a complex ecosystem of invertebrates, birds, mammals, reptiles, amphibians, and aquatic life” says Schwartz.

With the installation of the passive wetland system, put in place to prevent runoff from reaching waterways, the rivers and streams should be teeming with fish and other aquatic animals. However, the Aquashicola Creek runs by the old New Jersey Zinc company site and other decommissioned mines in the area. As it meanders toward the Lehigh River, it has picked up large amounts of zinc, which it then deposits into the Lehigh River and continues to contaminate it for miles downstream. “Upstream from Palmerton, zinc levels are negligible, but below the cinder bank piles [a large smelting residue pile left by the NJ Zinc Co.], there is continual species decline,” says Michael Hock, Preserve Manager for Wildlands Conservancy.

To understand why the Lehigh River suffers from pollution, we must go back in time... 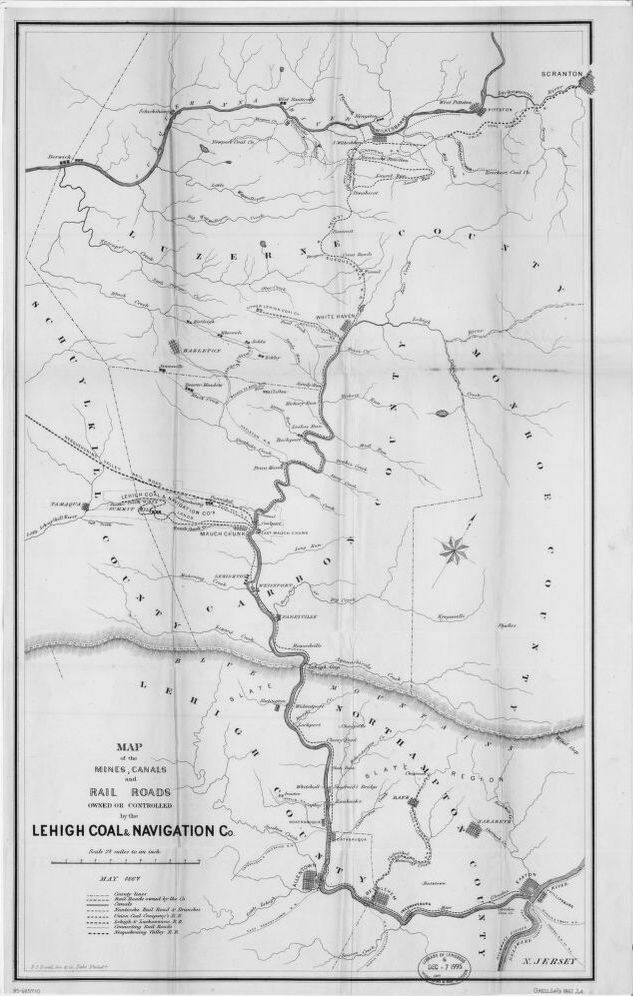 Wildlands focuses much of their efforts on land acquisition and restoration so that species in the area might have larger habitats and contamination can be contained. The main goal is to purchase land near rivers and streams that either need to be protected from development, or have already been affected and need to be cleaned. “Most of the treatment they’ve tried to do [with the] passive wetland system directly addresses the cinder bank,” explained Hock. Although much is being done about the contamination that still exists in the area, it is a constant threat to wildlife. “Once the runoff is in the river, there isn’t an easy way to get rid of it,” Hock states.

To an outside observer, these reports could seem odd. But the Lehigh River is full of fish, they’d say, the toxins can’t possibly still be in the water. On the contrary, there are definitely still toxins in the river. Despite the huge efforts that have been put in, there continue to be heavy metals contaminating it.  “Some of the first applications of trying to restore habitat were in returning nutrients to the soil with biosolid sludge. This was intended to be a good thing, but ended up washing into the river and had some pretty negative impacts,” says Chris Strohler, the Senior Conservation Planner for Wildlands Conservancy. Trial and error is a huge part of the remediation process, and as these practices have only been going on for the last few decades, it’s a relatively new science. “Our work mainly focuses on stream restoration,” Strohler adds, “The four miles of the Aquashicola creek before the Lehigh River have elevated levels of zinc.”

The large amounts of fish in the river are not indigenous and are mostly dead within a year. “[Trout] don’t do well in general in the river,” says Hock, “it’s definitely not a dead river, I can tell you that first hand because I fish it quite a lot. It’s not great but it’s not dead. But I can’t find any research on fish populations or whether there has been a change or not.” The majority of the fish in the river are stocked trout, meaning that they are bred in captivity at a fish hatchery and then dumped into the river to encourage recreational fishing. “Which Mike has a different opinion on,” Strohler joked.

“Vastly different,” laughed Hock, “only, I should be on that river.”

“This seems like a point of contention,” I prodded.

“Only since Chris has put in a few fishing access points have I seen anyone else out fishing,” says Hock.

What is clearly a joke between the two of them is also a clear difference between their approaches to wildlife. Strohler seems to be more on the side of conservation and ethical land use including the encouragement of recreation. On the other hand, Hock has more of a preservation mindset and wants to minimize land use, in general, to keep nature pristine and untouched by humans.

These hiking trails and nature parks are an effort to redeem the land and pay homage to what it once was. A wilderness playing host to copious amounts of wildlife. This existence of life was interrupted by the arrival of the New Jersey Zinc Company, pouring toxins into the environment, making it impossible for anything, plant or animal, to take root. Though this was years ago, the effect it had on the land is still obvious. The difficulty the LGNC and others are having bringing it back to life is a testament to how important it is to preserve and conserve the land that we have and tend to the wounded land we have left behind to be forgotten.

After years of remediation, the wildlife is finally starting to come back. But the toxins are not gone from the soil, the vegetation, or the water. What does this spell for the returning rodents, fish, and songbirds? How will the pollution affect bear, eagles, and raccoon who have not yet started to inhabit this once barren wasteland? Though the return of wildlife sought through remediation and habitat restoration has begun, their home is not what it once was, and will never return to its pristine and untouched state. 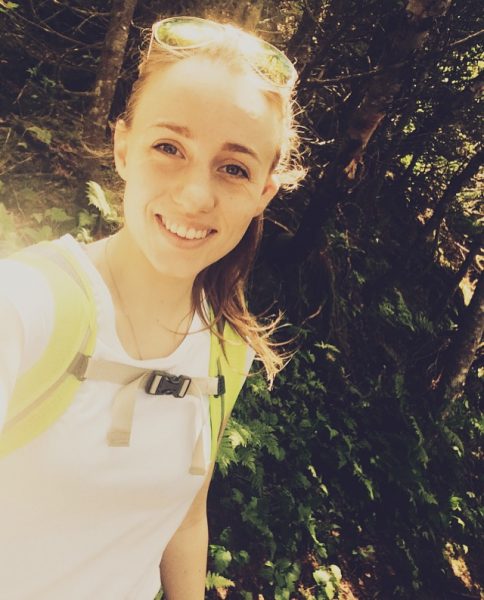 Erin Friberg, a Muhlenberg College 2019 graduate, is an environmentally conscientious individual striving for a career in Public Relations in a company of some environmental capacity. With a fascination in wildlife and animal conservation throughout her life, Erin has developed an interest in exploring the patterns of species populations at the Superfund Site in the Lehigh Valley, Lehigh Gap Nature Center. Although there has been a vast growth in plant re-population at the LGNC, little exploration has been done on animal repopulation, which has captured Erin’s attention in regards to this site. Erin was able to make the Lehigh Valley her home throughout her college years, although we are waiting for the day when she makes the Eagles her team over her original home team… the Patriots.